Saskatoon - North Side Homes for Sale

Having successfully combined small town hospitality with big city amenities, the vibrant urban center known as Saskatoon, Saskatchewan is one of the best places to live in Canada. Sitting on the picturesque banks of the South Saskatchewan River, the city of Saskatoon is home to over 300 acres of gorgeous riverbank parks and 254,000 residents. Proud of its rich multicultural heritage, Saskatoon celebrates the past while embracing the future with numerous special events, festivals, clubs and galleries.

Situated in the heart of the Canadian Prairies, Saskatoon experiences four seasons each year and enjoys more sunshine than any other city in Canada. Connected to other cities via Highways 11 and 16, Saskatoon is a wonderful place to call home and is comprised of over sixty neighborhoods divided into five areas. Among the most popular areas are the east side, west side and north side of the city.

The north side is, as the name suggests, the northernmost part of Saskatoon. There is a considerable amount of commercial development in the north side but the convenient access to highways in the area make travel to Saskatoon’s national parks and glistening lakes a breeze. Because of the area’s close proximity to scenic walking trails and its mature, well-established neighborhoods, most people who end up moving to the north side never leave. The north side encompasses Downtown Saskatoon and the popular neighborhood known as City Park. Other north side communities include the Central Business District, Kelsey Woodlawn, Lawson Heights, North Park, Richmond Heights, River Heights and Silverwood Heights.

If you would like more information regarding homes for sale in the north side communities of Saskatoon, Saskatchewan, please do not hesitate to contact us today.

135 Quarter Sections for sale in one parcel! Located in the Riverhurst & Morse, SK area E/S.E. of Lake Diefenbaker & N. of the #1 Trans-Canada Hwy. This versatile large b...

This is a rare chance to buy a legacy farm with tremendous capacity. This farm is located southeast of Elrose in the heavy clay and clay loams. The average frost free da...

Excellent investment opportunity to acquire 310 acres of prime land. Located east side of Regina, next to city limits. Currently, agriculture has future potential for lig...

Full quarter of development land touching east Regina city limits. This land is included in the Joint Planning Area between Regina and the RM of Sherwood. Main CPR rail l...

Let me introduce to you a very progressive business in the City of Weyburn that has been a huge part of the community since February 1983. The Siourounis brothers and th...

Rare opportunity for land developers and investors. Located 1 mile east of Regina on McDonald Street along Highway 46, and and adjacent to Torhill Golf Course. 623 Acre...

Are you looking for an investment portfolio in the header of the oil industry in the rm of Estevan. This subdivision is located off the bypass. The subdivision has power ...

Existing commercial/residential subdivision approximately 255 acres located on east side of the city of Yorkton and fronting Highway # 10 east and next to the New Hollan...

Pattison Developments Industrial Park. A total of 52 acres of land is available at $130,000.00 dollars per acre and will be subdivided by the seller in various parcel si... 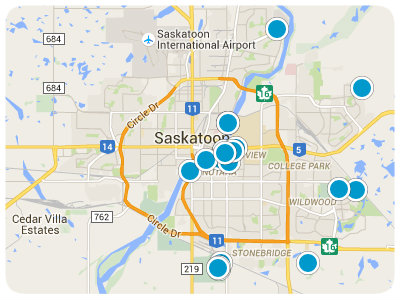